Houston’s Bay-port Cruise Terminal was an ambitious project – designed to lure cruise ships to Houston. Built in 2008 at a cost of $108.4 million, the facility was never profitable and actually sat idle until 2012. In February 2016, the cruise lines gave up on the terminal completely, with both Norwegian and Princess pulling out. 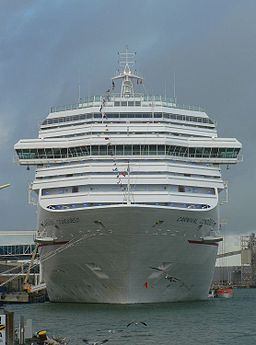 Houston was likely never going to compete for the lucrative Gulf cruise market with Galveston, much closer to the action. One problem being that the several hour trip from Houston to the Gulf happens in inter-coastal waters – where the ships are not allowed to run their casinos. Galveston, meanwhile, continues to expand.
The Port of Houston finally decided to give up on the terminal this summer, as a failed venture. Instead, the authority came to an agreement with Auto Warehousing Co. to turn the site into an import facility for vehicles. They are projecting 36,000 vehicles will come through the terminal in the next 3 years, creating at least 150 jobs.

At the same time, the Port of Houston Authority is changing its name to Port Houston and launching a new campaign – the two things together indicate that there will be changes on the horizon. With the cruise terminal gone and converted, a failed venture has been abandoned and the port can refocus on the crucial international shipping trade, particularly with expanded production of petrochemicals in the Gulf area.

In other words, the loss of the cruise terminal might, in the long term, not be a bad thing. True, Houston has plenty of things to attract tourists – the city has great restaurants and hotels, and attracts top-notch conventions and conferences including some major medical and oil field conferences. However, it was never going to compete in the cruise market.

For those involved in international shipping, the return to a focus on moving containers and trade is likely good news, and while the deal with Auto Warehousing Co. is set for an initial three years, it is likely to bring more traffic and money to the port in the short term – and with luck will last far into the future.

Port Houston is rebranding itself and moving forward, and refusing to dwell on the past. Any successful company should do the same thing. In the meantime, the first ships are pulling up to the retrofitted former cruise terminal and the flow of trade is moving. Although the hotels and restaurants might have lost out a small amount, the fact that the terminal never attracted more than a handful of ships makes this an excellent move for Port Houston and the city in general.